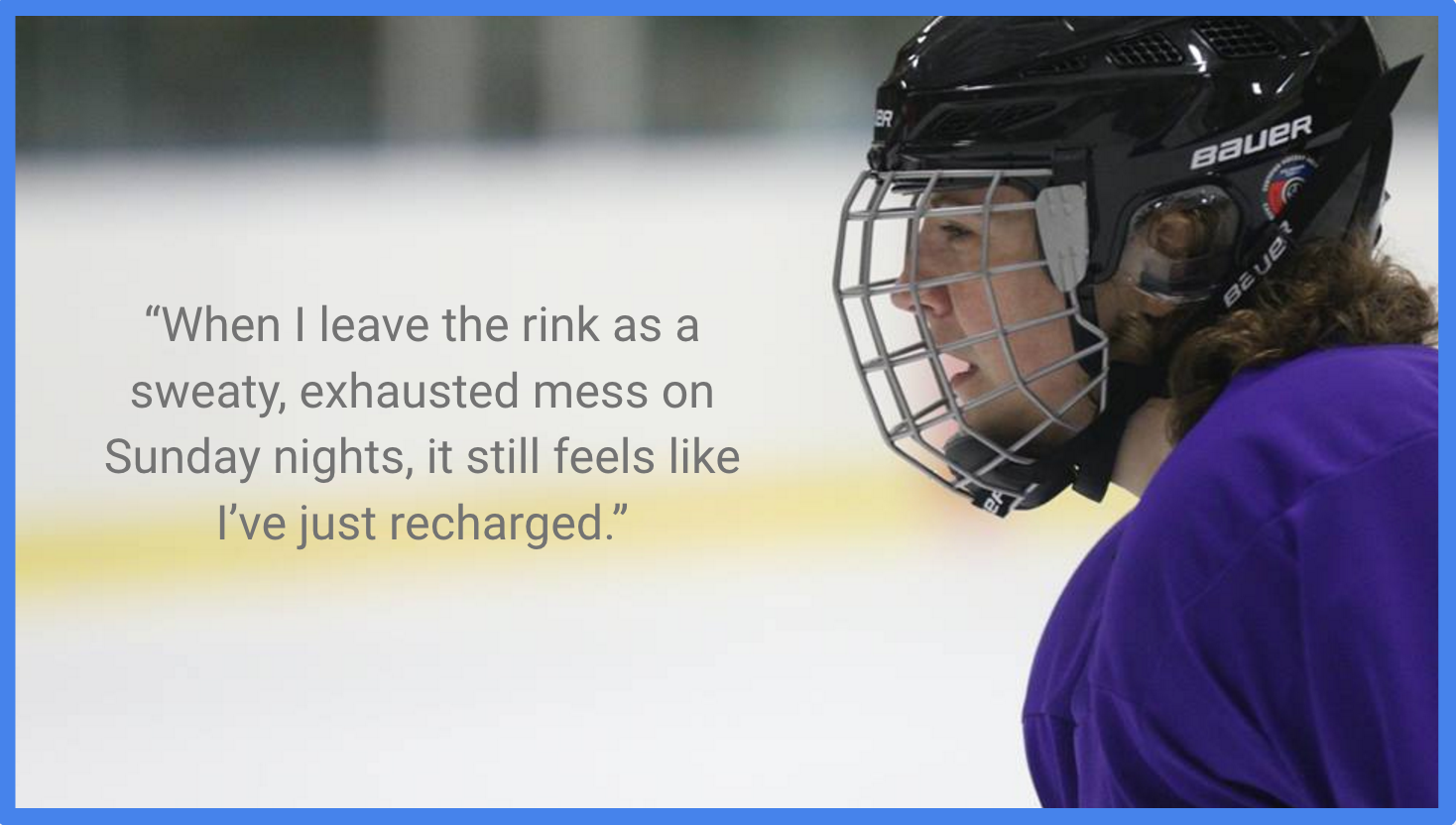 I’ve spent many of my 31 years just existing. There have definitely been times when I’ve felt like I was actively living, but until fairly recently, those moments weren’t the norm. Then, in August of 2015, I joined the MGHA and started living on a full time basis.

The beginning of 2015 was a rough time for me. I was unemployed, living in the house I grew up in, and feeling almost completely aimless. The profession I’d thought I’d spend the rest of my life doing had fizzled spectacularly. I was marathoning 90’s TV shows on Netflix and spending hours scrolling through online job postings. After weeks of increasingly lethal cabin fever, I started taking a lot of really long walks. Being active helped, and I began to think of ways I might supplement those walks.

I’d heard of Madison’s gay hockey league; it’s nearly impossible to identify as gay in Madison and not know about it in some capacity. It wasn’t until I sent a mildly inquisitive Facebook message to a friend who played with the league that I actually considered playing a possibility. The response I received was almost immediate and ridiculously encouraging: “Yes. It’s great. Go sign up. Do it now.” I responded with a noncommittal “I’ll have a look at the site.” Five minutes later, my phone buzzed. “Did you sign up yet?” So I did. I took a survey, got accepted, was assigned a mentor, and bought a carload (no joke – I drive a Civic) of equipment. Presto: instant hockey player. Right.

There aren’t really words to explain the level of anxiety I felt in the weeks leading up to orientation and the skills clinics. I’d skated before, but had never done so while wielding a hockey stick and covered head to toe in protective gear. I’m also a card-carrying introvert, and meeting new people has always been stressful.

On the day of the first clinic, I knew exactly one person who’d be in attendance: my league-assigned mentor (who, by the way, is awesome). What I realized very quickly, though, was that a small part of me already knew a small part of almost everyone else there. While I would never in a million years presume to say I know all of their stories, I began to recognize myself in a lot of the faces in attendance. For the first time in my life (other than when I was with my family), I felt like I belonged somewhere. I didn’t have to hide or apologize for who I was, I wasn’t self-conscious about my abilities, and I was able to contribute in a meaningful way.

As the season progressed, I got my feet under me both literally and figuratively. My skating improved. I learned about positioning, puck handling, and, finally (with much good-natured, shouted warnings from nearly everyone on the ice), how to not be offsides all the time. Buffeted by the unconditional support and encouragement from my amazing teammates, my self-confidence improved markedly. People outside of the league noticed changes in the way I carried myself. My siblings, who initially thought my announced intention to join the league was facetious, couldn’t stop talking about how fun it was to watch the games. My personal thought on this is that observing so many happy people play hockey together can’t be anything but fun.

My experience with the league has given me so many things that are both tangible and not. It changed me physically, as exercise tends to. It’s made me feel more comfortable in my own skin. It’s made me feel more comfortable inside my own head. When I leave the rink as a sweaty, exhausted mess on Sunday nights, it still feels like I’ve just recharged. I’ve made excellent friends with truly remarkable people. I fell in love with an amazing woman. There aren’t many aspects of my life that haven’t changed as a direct result of my MGHA involvement.

Joining the league was one of the most impulsive, out-of-my-comfort-zone decisions I’ve ever made, but I can’t emphasize enough how happy I am that I made it. Living is pretty great.