To help our new players become familiarized with the sport of hockey, we’ve pulled together a bunch of good information, presented here as Hockey 101. It’s part crash-course and part reference, with information for new players and experienced players alike.

Check out these additional pages about hockey for more information.

Here are some hockey basics.

The rink is the area in which hockey in played. The ice surface is divided into three zones by the two blue lines: The neutral zone, and the two attacking/defending zones: 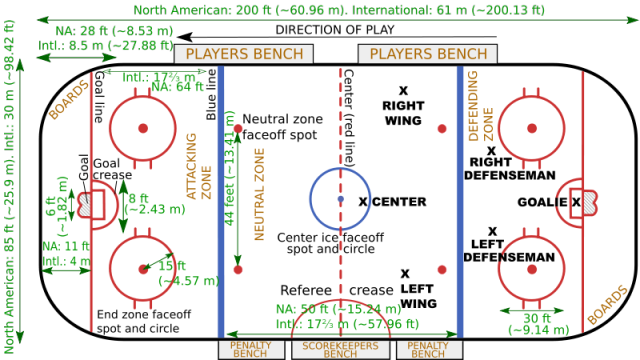 Teams play with six players on the ice at a time. Substitutions can be made during play without waiting for play to stop. Players are typically organized as follows:

When the Whistle Blows (Penalties and Other Infractions)

When an official blows the whistle, play stops. The whistle could be for three types of events: A goal is scored; a penalty is to be enforced; or a rule violation that is not a penalty: